Wrapping up summer and getting ready for winter

It's been a busy time of late, not least getting as much done on the new land before the weather cools down as possible. We renovated the front section of the greenhouse, our neighbour was kind enough to insulate it with bubble wrap, and we guttered a small section of the roof to set up an irrigation system of types. There's no water on the site, so any caught water is important. Then, weekend before last, we moved the cold-vulnerable plants in there. 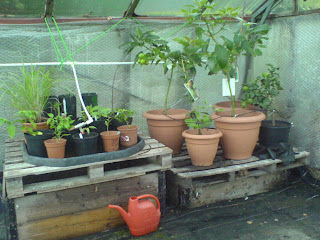 There's an intricate hose system to feed rainwater to the large pots on the right, with the smaller pots on the left sitting in an old concrete mixing tray as a giant pot saucer. It's important that they're able to water themselves, as they're going to be left to their own devices for two months over winter. There are lemongrass, chillies, various citrus, a lychee seedling and three varieties of avocado to overwinter. Everything else, everything which can possibly survive a winter outside, is being left outside to take its chances in the rain and cold. 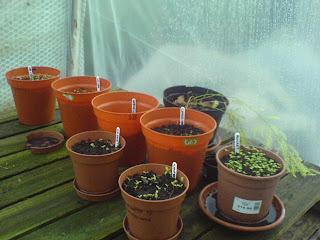 In the other corner of the greenhouse, I've made a start on some winter greens to grow under glass: rocket, spinach, various chinese greens and kale. The asparagus is a two-year-old crown which will go into the ground this weekend if it's dry enough outside. We've had a week of rain and the allotment is pure clay and too wet to be worked at present.

Meanwhile, at home, I've had a special present. I've always wanted to grow my own saffron, but living in tropical and sub-tropical climes precluded that. Once I started to set up my own gardens from scratch in the UK, my mind started to turn to saffron again, wondering whether it would be suitable for my climate in East Anglia. A quick google of "saffron East Anglia" answered that with the first hit....reminding me that the village of Saffron Walden is not 12 miles from my house. Duh! This area was the centre of the British saffron growing world in medieval times! So I ordered 50 corms as an experiment. Although saffron crocus is an autumn-flowering bulb, I read that if you plant the corms in autumn you may be lucky enough to have a spring flowering. So I ordered the corms in September and planted them in October, splitting them between the allotment and pots at home. And a week later... 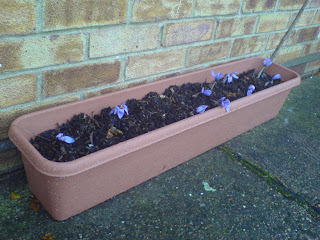 Many of the 20 corms at home are in flower! The flowers are less showy than the average crocus (and these had been rained on for two days prior to taking this photo so are a bit bedraggled)...but the smell. It's much more intense than dried saffron, and simply delicious. So I'm already harvesting my first harvest of saffron, removing the three stamens and leaving the flowers. I'll post a bit more about that another day.

The allotment is coming along as well. 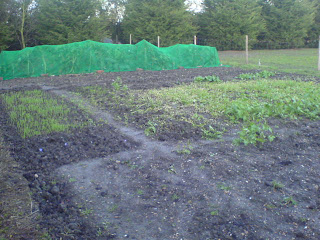 My part of the allotment starts this side of the covered brassicas in the background. This patch is 8 metres wide by 5 metres deep and I've divided it into six 1-metre wide, north-south beds with paths in between. Four for crop rotation with a fifth for grains, to put into the rotation as well, and a permanent bed. Most of the beds are under green manure for now (mustard, with winter rye about to go in), but in October we sowed the grain bed (second from the left) with hard winter wheat and the permanent bed (the leftmost bed) with barley. They're up and happily growing, setting roots before they stop growing for the winter. That will give them a good start before the spring. In other beds, this weekend I'll get in some very late onion sets (100 or so to complement the 50 already in), 12 different varieties of garlic (aiming to grow 100 heads next year for eating plus some to recycle for growing, as we eat a lot of garlic) and two different beds of broad beans - a full 5m squared bed here and another bed at the other allotment site. It's too late now to get any other veg into the ground: it was just too dry when the weather was warm enough. Fortunately we're already harvesting pak choi, salsify, scorzonera and radishes from this plot. Not bad when we only got it in late summer.

But wait: what's that in front of the barley? More saffron crocus in the permanent bed! 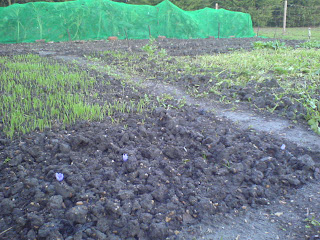