Sustainable eating and the greand plan 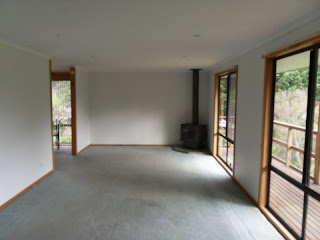 This photo is just to make yarninmypocket jealous. Yes, that's a woodburner in the corner (actually, it's the only heating in the house!).

Despite the fact that I've been living in a small flat for the last couple of months, I've scored well on the sustainable living front. Of course, it's easy to do so when you move to an area that has a strong primary produce industry, thriving markets and people who make their living growing market gardens. Most of the food I've been eating has been bought from the market gardeners and grown locally: luscious summer berries, green veg and lately, local tomatoes. Even locally made goat's milk yoghurt, which is absolutely luscious. I'm proud that in six weeks I've only visited the large supermarket twice. I've also been baking my own bread after buying a mere two loaves from local artisan bakers. It's going to sound dangerously like boasting, but I didn't like their bread as much as my own!

As most people will know, Australia has had a devastating series of floods in the last couple of months. The areas that have been hardest hit have been the rich, fertile vegetable-growing areas which are, of course, built on the immensely fertile flood plains of large rivers. There is already a shortage of many fresh veg in the country, and prices will rise. Something that shocked me in the media coverage is how many households ran out of food withing just a day or three of being cut off from shops - despite being warned that the flood was coming, they are so disconnected from their food supply they failed to prepare adequately. This kind of thing makes it even more important to take control of one's own consumption. My household could live for at least a month (and possibly more based on how much I failed to run my UK pantry down) out of the normal contents of my pantry, although that's not the case at the moment.

Which brings me to the plan to set up our sustainable lifestyle anew here. Obviously there's going to be a certain initial investment required, but I intend doing it in steps. Our new rental house is a good start: it's on tank water with a septic sewage system and its only heating is from a woodburner (something that is sustainable if managed properly on a highly forested island, controversial as logging is). That's a good start for keeping our consumption on the property.

The next step will be to get veggie gardens set in. As I know this will be a short-term property, obviously we don't want to do too much, but we want some food in the ground. I've just missed the major summer planting time, but I'm just in time for one or two late-planted summer veg and the autumn planting. I'll post more about that over the next week or so.

The next step is to set up the food reserves. One of the reasons I do this is because it's cheaper to buy in bulk, and it can make it easier to buy staples from local producers who may only sell wholesale. But it also means there's a food reserve that can get you through the lean times. Things like rice and beans can be hard to buy from local sources - these are often imported - but I can at least work on growing my own beans. I've heard of a windmill in the nearby area which grinds grain, and I intend checking them out as soon as I have some free cash, with the intention of laying in flour for baking.

The important thing is to do this in little steps and pay attention to what's going on around me. I know effectively nothing about the property I'm moving to yet. I don't know where the light falls, what the soil is like, and how many local critters are likely to eat every seedling I put in the ground. I'm almost certainly going to have to protect seedlings. It's a matter of watching and learning before rushing in.
Posted by Geodyne at 13:39 2 comments: Links to this post

Otherwise known as "why I no longer call this blog backyard self sufficiency". 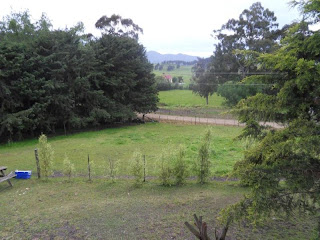 This blog started life as my attempt to track efforts in maintaining a self-sufficient lifestyle while stuck in the city. As a result of my move, that's no longer the case!

After two months in temporary accommodation, I'll be moving this week to a small rural property in the Huon Valley region of Tasmania. This is the view from the front verandah. There are even a couple of promising-looking wineries just down the road. The house is on a 1-acre block and we'll be living here for a year or so, which is enough space and time to relax and enjoy the wildlife and get to know the area while looking about for an acreage to buy.

I'll be camping in the empty house for the first 10 days, before the furniture arrives. But the veggie garden starts in two day's time. Watch this space!
Posted by Geodyne at 16:43 4 comments: Links to this post