We were supposed to go away for an extended long weekend's cycling this past weekend, but we didn't. Instead, on Thursday, we noticed that one of the chickens was opening her beak and straining on each outbreath. You can see her pose in the photo below - head back, beak open, a faint wheeze on the outbreath. 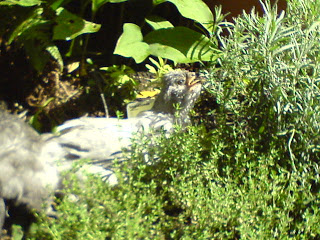 Some diagnosis suggested either a respiratory infection (less likely) or gapeworm, a parasitic nematode which infects the trachea of birds. Gapeworm isn't all that common, but her symptoms were classic - and there are a lot of wild birds on our property and she's been doing a lot of scratching around compost for slugs and worms lately - they're both carriers. We've been watching her anyway, as she has been a good couple of weeks behind the other two developmentally, so on the Friday morning a trip to the vet was in order.

For a bird who doesn't really like being picked up, she was remarkably patient and well beahved at the vet. I was expecting WWIII, but she sat quietly and calmly on my hand for a good 3/4 of an hour, protesting remarkably little even as the vet palpitated her and placed a stethoscope on her breast. The vet suggested worming all the chickens and putting Lavender on daily antibiotics for 5 days - forget that weekend cycling in Wales!

Worming them was easy, as they were all to eat that and have a 'treat bowl' from which everything is gobbled. I mixed the worming powder with some moistened chicken crumbs and a very old and squishy banana. Fortunately I have greedy chickens who will eat out of my hands. So the antibiotics were placed on one piece of bread, and I'd hold one laced piece and one 'clean' piece, swapping hands according to whoever was eating.

Lavender has definitely improved, and is breathing more easily now - and has caught up on one of those two weeks of developmental delay she had. She grew a tail in just three days.

And we got to spend a couple of days playing with our new 'farm'!
Posted by Geodyne at 08:35 No comments: 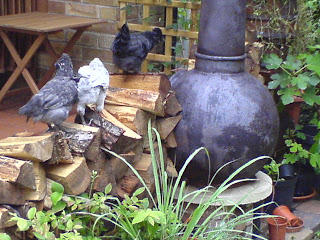 Because apparently, there's nothing quite so much fun in the world as climbing up a log pile. I hear it's also a great place for a snooze: 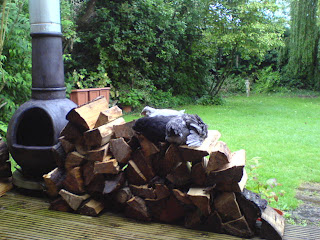 The next step up towards self-reliance.

We've been lucky enough to be offered a private allotment on our landlady's agricultural land.

After dinner we went for a walk to see the new allotment. We were taken down to view it on Monday, and were given a key for the gate on Tuesday, so we went last night mostly to make sure the key worked. We're both really excited by this - the plot is 15 acres (although we're only looking at 1/2 acre at the front at the moment), and is covered in industrial greenhouses. When you go in and close the gate, the whole world is left behind: it's completely private. It was used to grow flowers for the dried flower industry, and tomatoes. It's been unused for 6 years aside from a paddock agisting horses and it's amazing how quickly it's become derelict and overgrown. A smallish patch has been ploughed for a test veg bed, with potential to dig up more as required: start small. We're going to expand the quantities of usual veg, broadbeans, courgette, brassicas, leeks, onions, garlic, potatoes, pumpkin etc etc, as well as try our hand at growing peanuts and a test bed of wheat. We're also going to renovate 1/4 of one of the greenhouses to start with, to prepare it for next year, at which time we plan to grow oka, aubergines, tomatoes and pineapple in it. That's going to be the big initial job because the outside has overgrown with brambles and some of the glass frames need replacing.

We're trying very hard to rein in our enthusiasm at the moment. We have Friday and Monday off this weekend, to make a long weekend and amongst other possibilities, had thought to go cycling in Wales. We're having to restrain ourselves from staying at home and spending the weekend working on the new allotment. There's a Bank Holiday next weekend, which makes it the perfect time to stay at home and work on it.

Did I mention that we're both excited? This gives us the chance to play smallholders and learn more without having to have bought the land. That means we can experiment a bit more than we otherwise would and decide whether it is actually for us. It's the next step towards increased self-reliance: a chance to move on and do this seriously, rather than dream and play a bit, which is what I've been doing with it for the last 12 years.
Posted by Geodyne at 03:49 No comments: