Back in May, we got three 5-week-old Araucana chicks. We were never very imaginative with names, so as we got one each of three varieties, a blue, a black and a lavender, they came to eb known as Blue, Black and Lavender.

They'd all been sexed as female, but as time went on it it became apparent that things hadn't quite gone to plan and one of them was becoming more and more dominant and aggressive. And was in fact, turning into a boy. We didn't want a cock, so we began referring to him as "the defective chicken". He was, however, turning into an absolute beauty. Fortunately the chickens had come with a "promised sex or return" guarantee (an advantage of buying them from a reputable breeder with a passion). I spoke with the breeder and he confirmed my diagnosis of mistaken sex, and offered to exchange him for a pullet. We discussed keeping him and endlessly debated the pros and cons of the decision, but the bottom line was that we didn't really want a cock as we don't want fertilised eggs. By the time we got around to returning him last Friday, he had started to turn into a true stunner. His ruff over time will turn the most wonderful tawny golden colour. 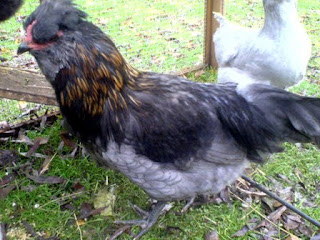 Catching him proved challenging. The chickens don't particularly like being picked up, in fact we use it as a deterrent to keep them out of places we don't want them. I came home early on Friday, snapped the quick shot above with my phone, gave them a treat and caught the cock bird. But he's a big bird and he fought back, flew over my shoulder and then the other two got out as well. My mistake: they're let out when I get home from work if it's light, and he wanted a run! He got one. I spent the next half-hour tempting him with hand-held treats, and in a flash of being faster than him, grabbed him (cue loud startled squawk) and stuffed him in a cardboard box.

I already knew from talking to the breeder that he was really keen to get his hands on Blue to put him to stud, which had me delighted because obviously we'd become a bit fond of the lad. So I drove out to the breeder's and deposited Blue. I knew the breeder had lost some birds to illness, but when I got there I discovered then why that had happened. In August thieves broke in to his property and either stole or killed most of his breeding stock, in excess of 220 birds, over a dozen different breeds, some very, very rare. He managed to find some that had been sold on, and was insured, but lost most of his genetic diversity. Then, when he bought in some Araucanas froma reputable breeder to replace his stock, several waves of illness decimated much of what was left. Absolutely heartbreaking. That makes me even happier that he has Blue with which to restore his bloodlines. 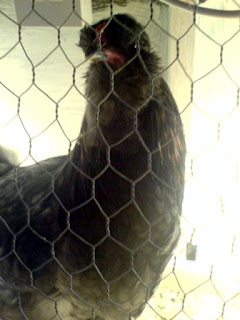 The breeder was amazed at the sheer size of Blue, and pleased to see him again. This was the last I saw of him, in a temporary home in one of the breeder cages while a new run is built for him. He'll have a good life; relaxed, with as large a harem as he'd care for. Lucky chicken! 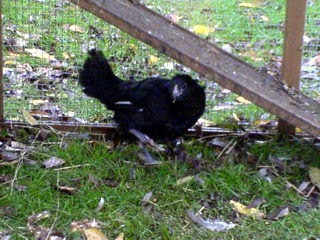 This is the new little girl we swapped him for. She's a beetle black araucana, the same as the black I already have, and is only 11 weeks old. She's less than half the size of the other two pullets and was severely picked on by them for the first couple of days. The other two are a bit confused and traumatised at the moment, and very wary of me. That's reasonable: after all, I hand-fed Blue and disappeared him, never to be seen again. Who knows whether it could happen to them?

The new chicken lacks a name as yet, although I'm calling her "Chick-chick" at the moment. I may just call her Blue. She's quite human-imprinted so as the other two chickens are giving her a hard time, she comes to me for company whenever I'm outside at the moment. She's slowly being accepted though, and waits until the other two go to bed, then huddles in between them for warmth at night. They can be clever sometimes, in a chicken kind of way.

I'm even told chickens sometimes produce eggs...although I'm still yet to see any evidence of this from my lot!
Posted by Geodyne at 00:38

I suspect that the rare breeds are being killed intentionally by those working for industrial agriculture. They are making efforts around the world to eliminate indigenous animal stocks which they need to do to replace them with genetically engineered animals. T

hey are already doing this in Asia with poultry where they used the avian flu they caused with the giant multinational poultry factories and where 90% of all poultry illness occurred, to wipe out the stocks of local farmers.

The bird flu was a hoax (it was not something that threatened to kill millions) but they used that fear to create a public health emergency to get rid of local farmers' poultry and then to substitute genetically engineered chickens. Now the farmers only "rent" the chickens which are patented and so they are owned by multinationals. And only those farmers able to afford to pay to keep them always under a roof (which was a law the multinationals also pushed through) can even own those.

This appears to be a set up on the animal side to do what Monsanto has done on the seed side - put animals out of reach or destroy them and the biodiversity they represent. It's already happening in Asia.
http://www.globalresearch.ca/index.php?context=viewArticle&code=ENG20051127&articleId=1333
http://www.ens-newswire.com/ens/feb2006/2006-02-27-01.asp

And they are ready with biotech animals and justifications (or emergencies they manufacture) for them. And it is unclear (they keep it all unclear) whether DNA will be taken from all the animals (with farmers having no say and no means of profiting from any use of that DNA).
http://www.gmanews.tv/story/121382/For-dinner-Genetically-altered-super-chicken
http://www.timesonline.co.uk/tol/news/world/article584036.ece

Foot and Mouth Disease that wiped out many rare breeds of cattle in the UK has been acknowledged to come from a lab leak. It was not natural. And there were no laws in place to demand that cattle must be PROVEN ill before killing them - they were killed regardless. That is what people in the UK need to be demanding now.

And under the "threat" of swine flu which is another Big Pharm and pharmaceutical industry hoax, pigs (perhaps an unusual breed, too) belonging to the Coptics in Egypt were all slaughtered though there was not a single case of swine flu there.
http://www.timesonline.co.uk/tol/news/world/africa/article6193785.ece


This is not to frighten anyone but to make people aware so they can write about and report the killing you mentioned and any others. I suspect there are many others going on. People need to expose this and raise the question about what is going on and who is behind it and what laws must be in place to prevent this destruction of animal biodiversity.

And it so people can work together to protect the animals. And everyone who can should be holding and breeding rare animals but not making that public so the anmals are hidden from those behind this.