More of 'the farm' (therefore part 2) 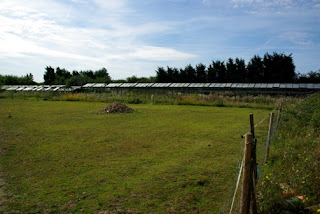 This is the view from the veggie garden, looking more or less south across the bottom of the horse paddock. This is where most of the greenhouses were built: acres of them. All completely derelict now and effectively impossible to get into because of the brambles. You can see how badly in this image: 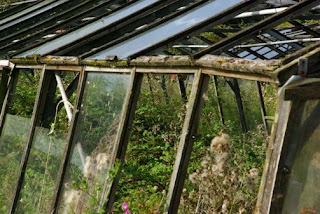 Such a shame. Still, we'll have our work in front of us just refurbishing 1/4 of one for the meantime.

Looking slightly to the left of the top image, the rest of the horse paddock. The low building is the barn, and to the right of it is a very large cage containing a very old cherry tree. 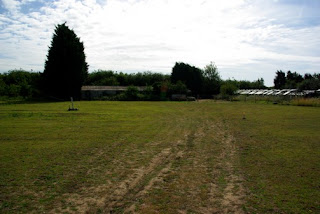 We got access to the property too late this year to be able to gather any cherries and it seems no-one has been inside the cage for years, but I hope to be able to do a little pruning this winter, and arrange to access the cherries next summer. 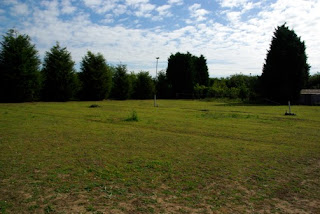 From the same spot looking east, the rest of the horse paddock. In the middle of the background, between the two sections of conifer, are some smaller trees with tantalising red patches. A wander across at a time the horses weren't there (we're not so rude that we'd invade someone's horse's space without their permission) confirmed that the area was a largeish apple and pear orchard - probably 20 or so trees, with a lot of apples and pears just coming into season....at least, covered in apples and pears on the parts of the tree that are above horse's head height! On the strength of that, however, I've just ordered a couple of trays of preserving jars and am seriously considering treating myself to something I used to own in Australia and now miss, a food dehydrator.

As a final image, the chickens: 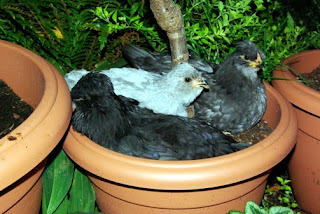 They'd really taken a liking to scratching around in my fruit tree pots, and took a particular liking to this avocado tree. One evening just on dusk I found them all settled in to the pot, clearly expecting to spend the evening cuddled up, wrapped around the tree. Normally they hate being picked up and run if you so much as look like you're thinking of doing so, but this evening they were so sleepy they patiently waited as I carried them one-by-one to their sleeping box.

They've actually become something of a pest, scratching around in the pots, so I've purchased some thin weed matting and have placed it on top of the soil. Problem solved: no more scratching. Yes, I'm aware I'm a killjoy!

ps: You can see that Lavender has been picking up. She's well behind the other two in terms of weight gain - in the last fortnight she's gained just 20 grams as opposed to the 150+ grams the other two have gained - but at least she's gaining weight, and her feathers are finally starting to fill out.
Posted by Geodyne at 04:49