That was an unexpected side benefit

I moved the chicken coop to its winter location yesterday. Through the summer, we've had the chickens on grass, moving the coop more or less daily to reduce the impact on the lawn and it's worked, but with the winter weather coming I wanted to get the chickens off the wet grass and muddy ground: and after this week I'm going to be forbidden to lift anything for 6-8 weeks, so won't be able to move the coop. So several weeks ago we laid some flagstones under the willow tree, and yesterday I shifted the coop onto them. I strewed a relatively fine absorbent chaff over the hard flagstones to make a deep litter bed for the chicken's feet, and called it home. 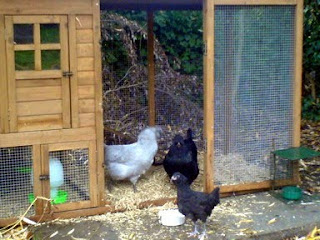 It was a resounding hit. They spent the rest of the afternoon happily scratching through the chaff, diligently removing any grass seeds they could find!

I also spotted a hedgehog roaming the garden early yesterday morning...so late in the season. It's been very mild here this autumn though: we haven't even got near our first frost yet and it's already the last week of November. I'd stopped feeding the hedgehogs weeks ago!

I'm grateful that it walked straight to the Hedgehog Palace though, not exploring, clearly heading for bed. So I know that the Hedgehog Palace is occupied for the winter and put out a large bowl of dogfood in front of it last night. This morning? All gone. I'll repeat this for the rest of the week, to give it a bit of a boost before it's long sleep.

ps: You can see that the baby chicken is becoming an accepted part of the flock. She doesn't have a name as yet, but whenever it looks like one of the larger chickens will have a go at her, she has a pre-emptive freak-out, so the name "Chicken Little" suggests itself....we'll see.
Posted by Geodyne at 00:57