This is why you don't let your onions set flower heads

I'm always careful to pinch out onion flower stems (not least because they're so yummy), but what I've never seen is what happens if you let them grow. Many of my onions this year are in a remote plot in a friend's back yard this year, and I tend to only go to visit them once a fortnight to control the weeds. The onions there were planted as sets last autumn, so come the spring some of them flowered quite early. It took enough time for me to find them that the onion stems were quite large and stiff. But I snapped them down and let them grow to see what would happen to them. I harvested and cut one open, this weekend, and the end result was what you see in the picture below. 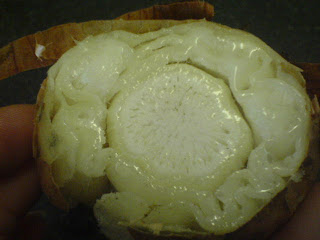 This is the bottom of the onion. You can see the very thick base of the flower stem in the middle of the onion, with a wrinkled layer of 'normal' onion layers around it. 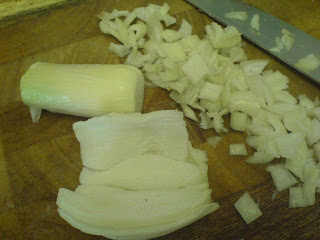 I chopped up the wrinkled bits at the outside of the onion and cooked them normally. They're absolutely fine to eat, even if they look a bit strange. Onions that have set flower stems need to be eaten quickly however, as they will not keep. I don't think this one would have lasted another month. 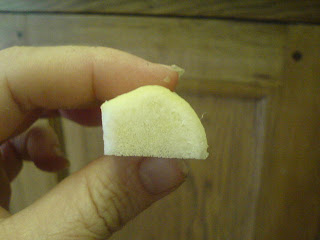 The onion flower stem itself is very hard and woody. If you click the picture above for the larger image you'll be able to see the cellulose cells which have formed to support the thickness of the stem and the size of the flower head. Not even I would eat this, I think it would be too woody to be pleasant. It was put out in the compost heap instead.

As it was so far along, I could have left this onion to flower and set seed, but if you think about it, that was the last thing I'd want to do. This was the first onion to set seed, and keeping and using its seed would propagate early-flowering onions. That's the last thing you want if you're planning to store them. Great if you're after pretty allium flowers of course, which is how the ornamentals came about. If you want to save seed, always let two or three of your best-producing plants go to seed. In this case, it would be the last to flower.
Posted by Geodyne at 05:57