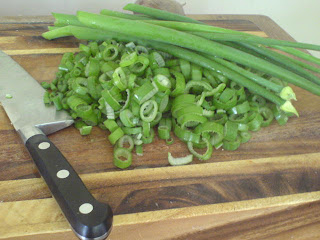 When I went to weed the bed in shich I put my autumn-sown onion sets, I noticed that many of them had started to set flower heads. This is undesirable as it creates a rough layer in the middle of the onion and reduces their storage capacity, so they should be removed. Of course, although they're tougher than spring onions they're perfectly edible and tasty, so I decided they were the perfect candidate to turn into a mallung to accompany a curry feast.

Mallung is a Sri Lankan dish, which is used as a way for people to get their vitamin intake from green vegetables. Basically it's a well-steamed curry of any green vegetable you can think of: leeks, cabbage, broccoli, broccoli leaves, kang kung leaves, Ceylon spinach...you name it. It can look a bit like slime but it tastes delicious beside curry and rice. There are often several varieties of mallung on the dinner table in Sri Lankan households. It's a method use by housewives everywhere to disguise the flavour of vegetables their children don't like (we regularly enjoy mallungs of vegetables we'd never dream of eating on their own). Recipes often include coconut milk, which I do not use. The recipe I use is quite simple, but does call for an ingredient unique to Sri Lanka called Maldive fish. This is a dried, pounded tuna-type fish which adds a savouriness. You can sometimes find it in spice stores which specialise in Sri Lankan foods. You can substitute dried shrimp for it, try adding a little splash of fish sauce or for a totally vegetarian version, just omit it altogether.

Heat the oil in a large saucepan and add the sliced onion stems. Fry for 5 minutes until slightly softened, stirring occasionally. Add the spices, stir to combine, reduce the heat to low and cover to steam for 10-20 minutes, depending on how tough your vegetable is (about 10 minutes for onion flower stalks). Remove lid and stir. If there's a lot of liquid in the pot, increase heat and cook this off, stirring.
Posted by Geodyne at 02:10

Oooh, I am glad to see this. ;) It really was my favourite of all the delicious curries you plied us with at the weekend - thanks! :)

Knowing that, I made sure this was the first of the home-grown veg curries I put the recipe up for! ;-)

I have to admit that we really don't "do" curries, but not because we dislike them. Curried dishes just haven't been part of our home cuisine. This recipe sounds good though and I'd like to try it. I do have plenty of onion stalks too!

Ah: you see, curry is effectively my native cuisine, so it's comfort food for me!

Onion stalks are also fabulous in stir fries, of course. That's how I'm planning to use the remainder of mine.