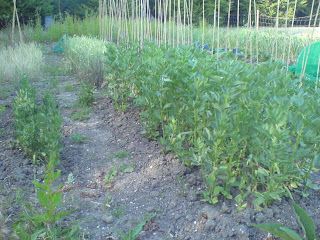 It's officially the dryest start to the year in the UK since 1929. And I live in the dryest part of the country, so while many areas have had some rain, things are starting to get dire where we are. We put in a 1,000- litre water tank in the spring but it's not had a chance to fill past 6 inches or so. Despite being frugal I emptied the last of it last night, so we'll be tanking water down to the allotment from today on. It's going to be a very hot weekend and the tomatoes need water. I don't water the allotment garden itself, but the plants are surviving. The clay soil of the allotment has turned into concrete and I've put off all of the mid-summer sowing and planting out until I know we'll get some rain to support it.

There's a thunderstorm and a couple of inches of rain predicted for Sunday night/ Monday morning, and I'm planning to have a sowing and seedling planting frenzy over the weekend, then cross my fingers firmly for rain. 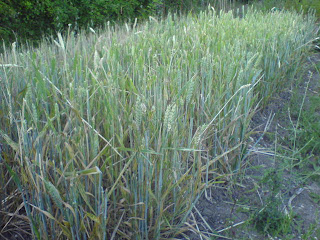 The wheat, which showed such promise all the way through winter and spring, has had several setbacks. This should have been a stirling year for wheat but we've suffered predation. The image above shows the wheat two weeks ago. It had already had some predation before that photo was taken, when one of the horses from the neighbouring field jumped the fence and had a lovely day nibbling on the tips and pulling plants out. 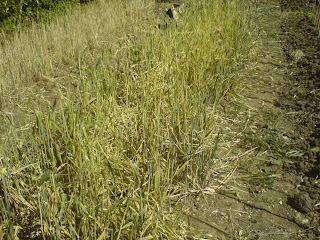 You can see where it's been flattened in the middle of the bed and crushed to the ground. When I looked more closely at it, I realised that the grains had been eaten individually off the stalk, in some cases leaving the chaff behind, so I suspect pigeons. Even though it wasn't quite ready I harvested what was left, to try to salvage some of the harvest. Lesson learned: we'll sow wheat again in September, and I'll net the wheat after it's flowered next spring. 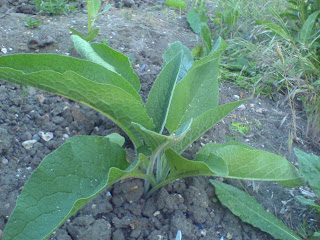 The runner beans are flowering and the french beans are coming away nicely despite the lack of water. In the foreground is a mix of borlotto, venezia and brown rice beans. The netting is to cover my green leafy veg and protect them from pigeons and rabbits. 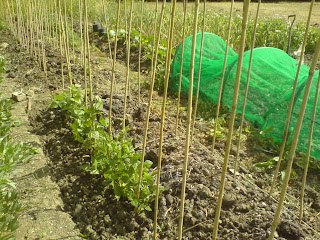 The onions/carrots/parsnips/shallots/radishes (left-hand bed) are thriving despite the pack of water. We sowed onions, carrots and radishes together in each row as they have different lengths of growing time. I've pulled out almost all of the radish now and have started to thin the carrots where they're sown thickly and are large enough. By the time the onions are bulbing and need the space the carrots will be mostly out - and the smell of the carrots and onions confuse the respective pests of each. The right-hand bed is the potatoes, which I hilled up for the final time last weekend. I sowed those with the early spuds at the front of the bed and the later maincrops at the back. I've started to harvest the first earlies at the front of the bed. The garlic, at the back of the onion/carrot bed (where you can see the fork handle) has been the big success story of the year. I intend writing more about the garlic and the broadbean trials next week. 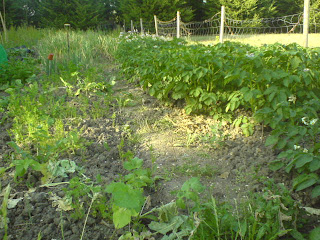 This weekend, I shall be:
And despite how long that list of jobs looks, I intend spending most of Saturday enjoying attending my local spinning group's meeting!
Posted by Geodyne at 06:13