'The farm', part one

Because we didn't go away the other weekend (see sick chicken in previous post), we were able to make a start on 'the farm', as it's now called. As I mentioned, this is a 15-acre greenhouse-covered former nursery site, which grew flowers for the dried flower industry and some tomatoes as well. It's been unused for some time, and is rapidly returning to nature. We're only using a very tiny part of it. The greenhouses are still there, although almost completely overgrown by brambles now, and most of the open land is rented out for horse paddocks. A small area has been ploughed for allotments to be shared by us an another family (the owner's nephew), and we've been told we're allowed to use a greenhouse as well. This is the greenhouse we chose, as it's closest to the gate and the most accessible in terms of having to dig it out from under brambles. 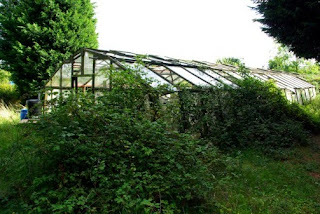 We wandered down to the site and took some photos (there will be more in another post), and set about clearing the brambles from the side of the greenhouse to assess the damage. The frames are rotten and there are a lot of broken glass panes, but we'll repair one section and seal that off for this winter, and perhaps renovate more of it in the future. Mr. G. immediately happily set about starting to repair the greenhouse. In a single morning he got the first two sets of frames on that side fixed, and set about repairing the door. He was in heaven. 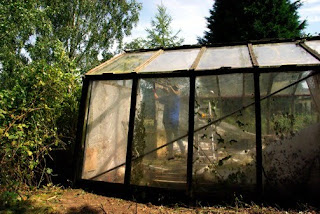 In the meantime, I set to on the allotment. Although it had been ploughed in the spring, quite a few weeds had come up on the uncultivated land. The green netting is about 1/3 of the way down the ploughed area and is the limit of the space the fellow allotmenteer had managed to cultivte this summer. That's why he's invited us to help out in return for our labour: it's too much for him to manage on his own. I cleared the weeds from the rest of it, and set a couple of rows and a few test beds of seed to see what would come up. So it took it from this: 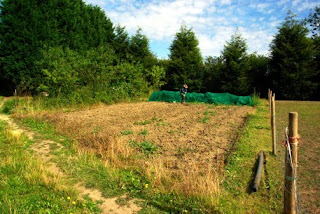 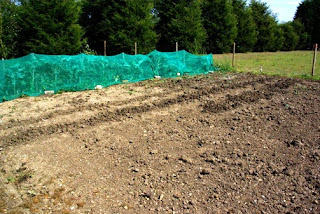 I sowed onions, turnips, swedes, pak choi, rapa, leeks, radish, kohl rabi and some lettucy greens (and other things I'm forgetting), all as an experiment. We don't know how aggressive the wild animals down there are to seedlings yet. I also broadcast mustard seed over quite a bit of it and raked it in, to use for a green mulch. We went down this weekend, and we already have some radish seedlings coming up. We'll see whether they're eaten. The next step will be to clear out the front of the greenhouse so it can be prepared to overwinter our tender plants, and some chinese stir-fry greens for winter veg: 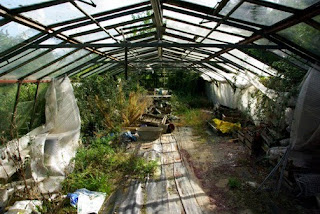 We'll lay in some late summer veg for winter eating, autumn sown veg for next spring, we'll overwinter our plants in the greenhouse, and we'll work on the fertility of the soil for next spring. It needs a lot of organic matter. Then in March, it'll be all systems go.

In the meantime, the home veggie garden is finally producing tomatoes and courgettes - thank goodness for the bounty of neighbours, who've been keeping us in courgettes, cucumbers and figs! - and handsful of french beans. I grow five varieties - yellow cherokee wax, blue lake, baluhilde (a purple variety), violetto (another purple variety) and borlotto (which I pick as a green bean) and we have some runner beans that have resprouted from last year's root. We'll soon have patty pan squash and the spinach is glorious. The potato patch is producing bag after bag of potatoes for storage, and we even still have some strawberries. While my little veg patch is productive and supplements our diet nicely, the new plot will mean we can plan for maincrops that will sustain us through the year: beans to dry and cook in winter, and our own wheat.
Posted by Geodyne at 08:00