Of chickens and vegetable gardens 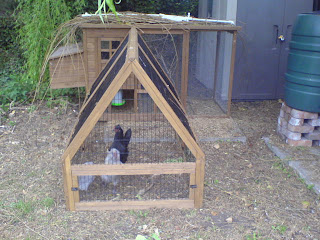 The chickens got an addition to their run a few weeks ago. We had planned to build them a new coop, but bought one as we came across a very solid model on sale for less than it would cost us to build. We've not yet assembled the new coop as there will be some groundwork to do, but in the meantime have used the run to extend their lock-up-daytime space. We let them free-range when we're at home, but they're clever little buggers and have been breaking into the vegetable garden every time we leave the house for something. I've not planted much in that one yet, but I have to admit that when I got home on Monday and found that one had broken in yet again and scratched up several of my lettuces, I had a humour failure. I had to remind myself that they produce beautiful eggs. 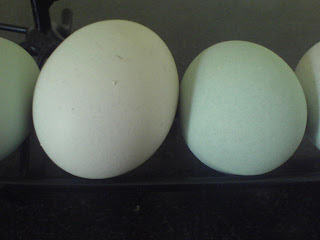 Because they're Araucanas, we get blue eggs. We can tell which is from who: Black produces large, ovel, pale pastel blue eggs; while Lavender produces smaller, bluer eggs with a pointy end. Lavender is obviously a more pure-bred Araucana than Black. 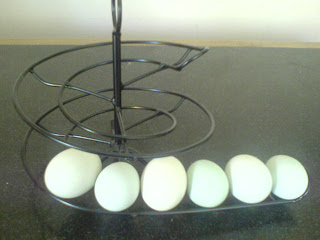 To store my eggs, I treated myself a an egg skelter. I can't say enough good things about this, it's brilliant. It's made by a husband-and-wife engineering firm in Devon, and stores up to 24 eggs in a way that ensures you always eat your eggs in the order they were laid. We're getting about 10 eggs each week from the two girls at the moment. That will go up next summer when the Lavender baby (known as Little Dave, for in-joke reasons) comes on-line. I hope to get another young chick later in the summer for the year after. We don't necesarily manage to eat them all, but it's a real treat to be able to give eggs away. We're not needing to keep eggs for more than a week at the moment, and often eat eggs that have been laid the same day. I'm planning to store some in a fruit cake soon (that will use up 6), we often make a Spanish potato tortilla (which uses 6), but even so I must look into waterglass to be able to store some for the leaner winter months. 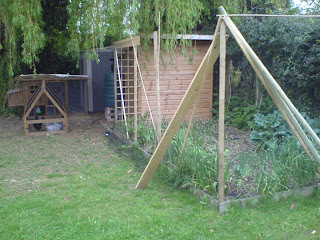 The project to bird-net the veggie garden is ongoing, amongst all the other projects we're doing at the moment. Nothing happened on it this past weekend, amongst bean patch digging, potato planting and kitchen-ripping-out. The cheeky buzzards are proving experts at finding their way in, no matter what we do, so we've decided that a knee-high baffle all the way around the garden is the way to go!

But this coming weekend we're planning a weekend off amongst all the busyness, to enjoy a weekend of motorcycling, steam trains and ale festivals!
Posted by Geodyne at 01:18