These little creatures are the reason I can justify calling my small rented backyard a smallholding: 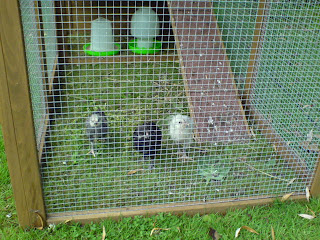 Because all smallholdings need some form of livestock! These are my girls. They're very young pure Araucana chickens. I got them as chicks, and they've doubled in weight in the last fortnight. They've not had a lot of human interaction, but I've started to bring them around. They love aphids, and this photo shows them coming to the end of the run to make sure I don't have anything yummy for them. They don't really have names, but as they're different colour breeds, they're called by their colour. From left to right: blue, black and lavender. I've not decided what their pecking order is yet - but neither, I think, do they. At the moment I'm moving their coop and run around the lawn on a weekly basis, but in the long term they'll rotate around veg beds to clear pests and fertilise the soil, and provide eggs of course. I don't expect any eggs until autumn or so. They won't be used for meat, as we're a vegetarian household. 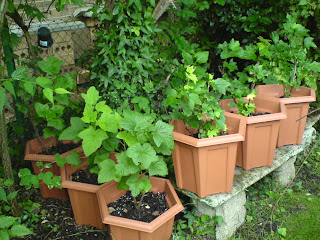 Just past the chicken coop is the rest of the soft fruit area, tucked under some trees. These are white and black currants, and I have a red currant tucked off with the figs. I have a few black currants this year but expect a lot more next year. Next year I plan to also buy a gooseberry bush. I'd absolutely love to have raspberries, but they're not really feasible in pots. 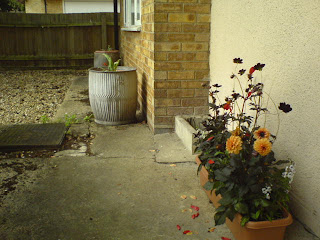 The front of the house is slightly less productive. We're on a well-frequented lane with a lot of young by-passers, so we try hard to cultivate the 'poor and not worth robbing or vandalising' look. That's a pity, because the front of the house faces east and gets a lovely morning sun. But I do have a couple of low tubs of cascading begonias and in the large metal tubs, four artichoke plants on the theory that they're not going to recognise those. And a lovely tub of dahlias and chocolate cosmos, because flowers are good for the soul!
Posted by Geodyne at 04:23